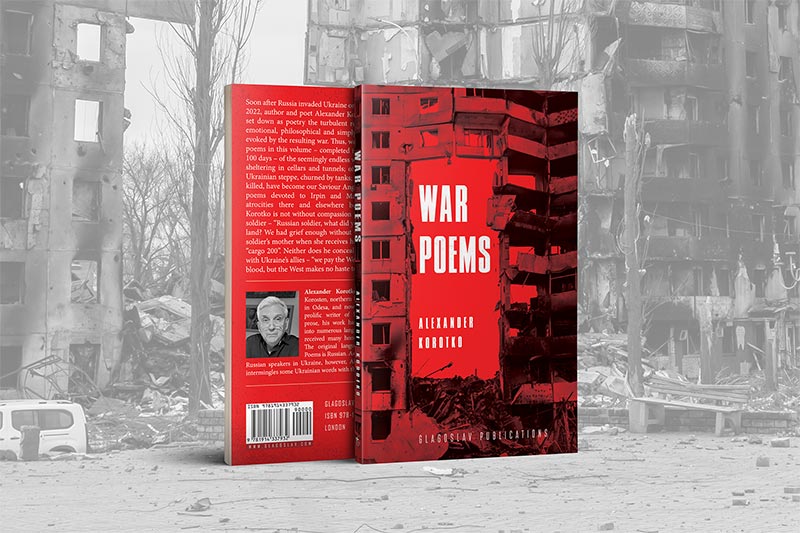 Soon after Russia invaded Ukraine on 24th February 2022, the writer and poet Alexander Korotko began to express in poems the turbulent responses on the emotional, philosophical and simply human levels evoked by the result of the war. Thus, we read in the 88 poems of this volume, written in just less than 100 days, of the seemingly endless wail of sirens; of sheltering in cellars and tunnels; of the celebrated Ukrainian steppe, churned by tanks; the dead “our killed, have become our Savior Angels” and whole poems devoted to Irpin and Mariupol, as the atrocities there and elsewhere became known. Korotko is not without compassion for the Russian soldier – “Russian soldier, what did you forget in my land? We had grief enough without you.” – and the soldier’s mother when she receives his dead body as “cargo 200”. Neither does he conceal his frustration with Ukraine’s allies – “we pay the West for help with blood, but the West makes no haste to deliver.” – This is the description of Korotko’s collection “War Poems” on the official website of the British publishing house Glagoslav Publications. Now follow the link

you can purchase the author’s unique collection published in three languages in one collection: English, Ukrainian and Russian. The translations of Korotko’s original texts into Ukrainian and English were worked on by the author’s constant translator into Ukrainian – Olga Ilchuk, with whom Korotko has been cooperating for many years, and Andrew Sheppard, the well-known editor of the “East-West Review”, the journal of the Great Britain and Russia Society. He traveled a lot in Ukraine during his association with the country, starting in 1997. Glagoslav Publishing House promotes Eastern European authors to English- and Golan-speaking audiences, publishes contemporary fiction and non-fiction by Eastern European authors, and republishes valuable works from the past that, despite their continued relevance, are currently unavailable in English and Dutch. The publishing house’s books are produced in soft and hardcover, as well as in the most popular electronic formats for readers in English and Dutch, both adults and children. Glagoslav members share an interest in the literature, culture and history of Eastern Europe and an appreciation of high-quality writing. To ensure that the quality of the translation matches the quality of the original, Glagoslav cooperate with experienced translators who have demonstrated the necessary knowledge and literary skills appropriate for each project. Korotko’s collection “War Poems” can also be purchased both in printed paper format and an electronic version of the publication in all the most popular electronic formats: