The famous British online portal of world poetry, prose and polemics The Recusant has published the poems of Aleksandr Korotk translated into English by Andrew Sheppard 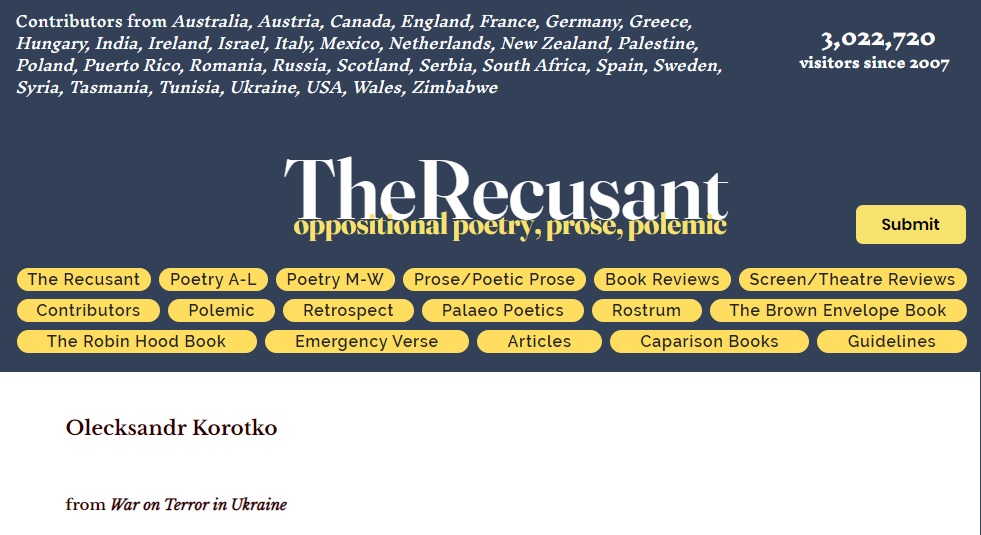 A large British online archive of poetry, prose and polemics with an audience of more
than three million has published an English translation of Aleksandr Korotko’s poems on
the subject of the war in Ukraine and the Russian Federation’s terror against the people of
Ukraine.
The poems were translated into English by the famous English editor and publicist
Andrew Sheppard.
The published text is placed below:

From War on Terror in Ukraine

On the gentle shoulders

on the soul of my motherland –

there was not just the

what will happen to them

from the bombs that fell

on our towns and villages.

You can read the original publication at the following link:

Aleksandr Korotko’s biography is also posted on the portal in the Contributors section:
Aleksandr Korotko. He is the author of about forty books of poetry and prose, which are
included in poetry anthologies, almanacs, and magazines. At various times, his works were
translated into Hebrew, English, French, German, Italian, Spanish, Polish, Greek, Croatian,
Azerbaijani, Chinese, Japanese, Korean, etc. languages. Member of the Union of Writers of
Israel. Member of the Belgian PEN Club. Academician of the European Academy of Sciences,
Arts and Literature in Paris. Laureate of the Literary Prize of the Mihai Eminescu Academy
(Romania, 2017), laureate of the Great Literary Prize &quot;Love of Freedom&quot; (Paris, 2017),
laureate of the Maximilian Kyrienko-Voloshin Literary Prize (Kyiv, 2018). Korotko extremely
demanding of himself. Fully aware that rest is nothing but a form of passive degradation, he is
always in search, always on the way. Developing spiritual qualities in himself, the poet strives
for a heightened perception of the world, for the constant presence of a sense of novelty – he
has a pronounced instinct for spiritual self-preservation. A poet, novelist, fiction writer,
essayist, author of literary miniatures, he addresses his work to the intellectual elite. In his
work, the traditions of classical poetry and a pronounced modernist orientation are
intertwined. Korotko is called a poet-philosopher of the postmodern era, a representative of
avant-garde poetry of the new era. Existentialism, mysticism, and surrealism are invariably
present in his work. Poetic creative range of Korotko is wide: from one-line poems to
conceptual works of the epic genre: poems and large poetic cycles.
In the original language, read on the portal:
https://www.therecusant.org.uk/contributors