Evenings of the Poetry of the 90s

The 90s of the past century finish the epoch, when poetry was loud at theatres, concert halls, big auditoriums. Epoch-making evenings in Polytechnic Institute, which burst together with fresh wind of the Thaw in the 60s, made poets idols, “personality cult” figures in the best and highest sense of the term for the next 40 years. Evtushenko, Akhmadulina, Voznesensky, Rozhdestvensky, Okudzhava, their young spiritual faces, daring lines full of freedom were known by the whole reading country. This was not a Masscult phenomenon or a tribute to fashion, this was an unexplained demand for listening to verses, absorbing poetry. Later concerts of Vladimir Vysotsky gathered huge amounts of listeners.

The second half of the 90s became an epoch of big poetic evenings for Alexander Korotko, whose first books by that time had already been put forth and poems had been published in newspapers and magazines. In 1996, in the end of September, “Pleyada” Concert Hall in Vinnytsia hosted a presentation of his book of poems “Workdays of Mind”. This was a truly warm meeting with poetry admirers, despite hazy chilly weather. The recitations by the author were accompanied with the songs by the composer and the People’s Artist of Ukraine Nikolay Svidyuk, based on the lyrics of Alexander Korotko. The evening was presented and organized by Nikolay Ilchyuk, Head of Culture Department, deputy governor of Vinnytsia region. 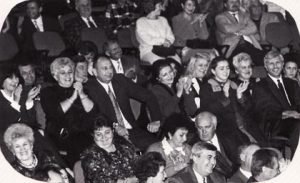 The poetic holiday in Vinnytsia was followed by another meeting of Alexander Korotko with his listeners on December 19, 1996 at Odessa Opera and Ballet Theatre. The evening was called “Leave-taking is a reason for meeting” as a line of his early verses. At the same time an audio album with the same title was being prepared for release. It was an album of songs by Nikolay Svidyuk, composer and performer, by the lyrics of Alexander Korotko.

How misleading is death!
In the dissolute heart your portrait
is kept. My right to own
everything I will have to pray for.

My soul won’t make a single step away from you.
Parting is a reason for meeting.
And already tonight I will make you a sign,
but for now let memorial candles flame.

And I hope indifferent coming of friends
will not hurt you by chance,
just while this insensible year
we will secretly meet. 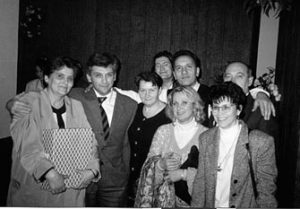 A poetic evening of Alexander Korotko was held in the Pillared Hall of Kiev Philharmonic on May 28, 1998. A book with the same title was also presented. It was a theatrical performance, a play staged by Aleksey Kuzhelny. The participant of musical and literary performance composed of lyric and philosophic poems were actors – Alexey Bogdanovich and Tatyana Olekseenko, Inna Pushkar, composer and singer, played the piano. In conclusion of the evening the author recited poems himself.

Clapping of dead hands,
adagio of windless butterflies.
From places, where you are now,
it’s hard to serve. Forgive,
so far from each other we haven’t
been so long. Grimaces of the day,
a painful fright of mute
memories in concert disturbs
the silence of others’ partings. Foyer
in a shabby coat touches the final
with its shoulder, and a silhouette
of your discreet phrases talks
with friends about nothing,
but it’s only a foreplay to that
empty room, where without words
the night is huddling to. I hesitate.
Each step on the road leads
to you, and nobody can help. 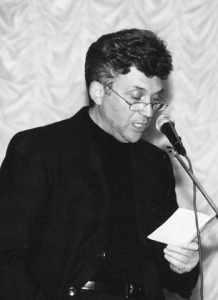 The poetic evening of Alexander Korotko at Kharkov Opera Theatre

At the end of 1998 another poetic evening was held at Kharkov Opera Theatre. The audience applauded to the poet, Alexander Korotko, and the composer, Inna Pushkar, who by that time had written a lot of new songs by the lyrics from the published books. Alexander Korotko has never written lyrics to be set to music and rarely wrote lyrics at the request of composers, the only exclusion was Inna Pushkar, who had been his creative friend for fifteen years. 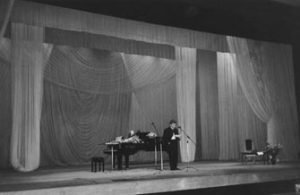 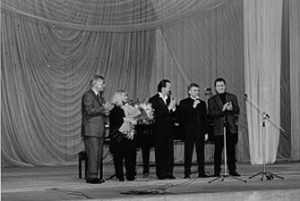