“The Poetic Evening for Two
This was probably one of the most significant events in literature in the beginning of the new century and the new millennium. On December 8, 2000, “The Poetic Evening for Two” was successfully held in Kiev, at Ivan Franko National Academic Drama Theatre. The theatre was full of spectators. Bella Akhmadulina and Alexander Korotko recited on stage one after another. The evening was opened and the participants were introduced by Pavlo Zagrebelny. His speech, amazingly precise and profound, created an atmosphere of holiday and elevated poetry in the theatre. 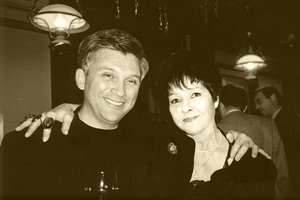 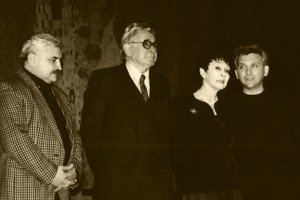 Kiev applauded to the native and the foreign performers, but it is commonly known that the power of poetry is borderless. Dazzling intonations of Akhmadulina with a singing accent and full of energy, laconic and precise poems by Korotko were not arguing, they rather co-existed in this beautiful evening.

*** Where to hurry, when nobody waits, when everywhere only parting, when the serf of minutes makes a noise, when all the rustlings and sounds rise from the depths of summer. A sad trial of memories, oddities of autumn, an oblivion, unrecognizable shelter, cold alien shadows don’t leave the heart. And the sky in the rags of stray clouds keeps such a sorrow inside, and in the mirror of a huge soul the sunset is burning in despair. In the outskirt of sunshine, by gossiping of poultry flocks, we are coming back from the summer to our boring but customary Paradise. 1998 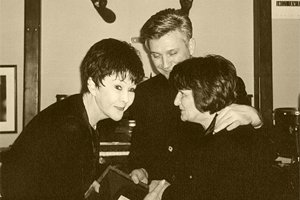 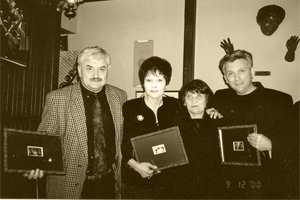 Alexander Korotko recited his newest unpublished poems as well as ones of the past years from the books of poems “Plaudits of Death Hands”. His poems “Nocturne” and “Petersburg”, both written in 1994, are always very well received, especially if recited by the author. PETERSBURG You have ever been on the banks of the Neva River, where the freezing cold of water involuntarily touch the soul, where the leaden roundelay of clouds is bathing in the abyss of waters, where the houses reflect which the street drive mad where the lonely bridges long ago are with the history on “you”, where all is perishable, as it was langsyne: the pharmacy, the street, the street lamp, the Stranger’s  familiar trail and Bloc’s pale silhouette, where the sadness is so majestic where you perceive the word Russ, where the inevitability’s rise, where white, white ship is shaking a sleepy dream where you die on the fly. NOCTURNE With the curtain of sunset in October in a fancy imagination of light, a soul participates in the game, the name of which is absent, and the flavor of silence tastes bitter with an almond pip of separation and painfully familiar sounds wake up at night time. A dream of shimmering nocturnes a quiet road in the stalls and the pure chime of moonlight sounds, converted with love to God. Desolate delight, self-immolation of crazy stars, birch thread of dew, my insomnia whirling, irreparable moments, mysterious breeze of the universe, dreamy chants whimsy of imagination… 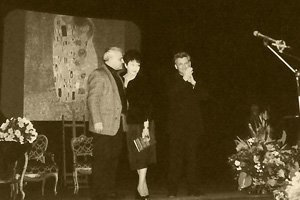 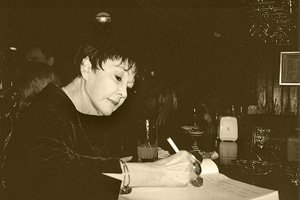 The evening was visited by Moscow guests – Alexander Tkachenko, poet and Director General of Russian PEN Center, and Boris Messerer, husband of Bella Akhmadulina, famous and gifted scenic painter and stage designer. You can find video version of the concert (fragments) in Video section of this site.
More