Poems by Alexander Korotko on CDs

The poem “Toward the Dawn”recited by the author

In 2000, the poem “Toward the Dawn” was recorded at “Komora” studio, Kiev. Alexander Korotko recited fifteen chapters, thus having laid a foundation of personal performance of the poems. 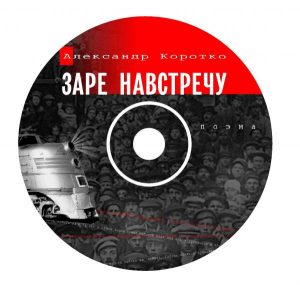 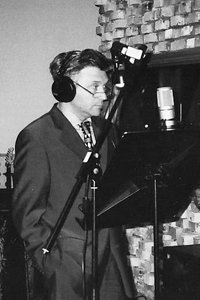 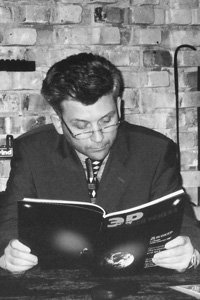 “Toward the Dawn” has a good fortune: its first edition was published in Moscow magazine “Russian Elite”, then as a separate book with preface by Andrey Voznesensky, the poem’s chapters were included into later books of poems by Alexander Korotko, the author recited selected chapters at poetic readings and other concerts; the play “The District of Celestials” staged in Theatre on Podol in Kiev is based on the poem; Sergey Yursky recites from the stage descriptive lines of the poem. EQUALITY One meter, in a hat acock, scored a goat With a hangover. In the cradle of revolution was languishing A proud lilac. On the hearth Emelja was sitting, Guarding yesterday. Desdemona was stifled for nothing. A dawn of prostitution was rising over the country. Everybody, who wasn’t lazy, committed a sin. The closest To the law were those who went off the top of head. The Party cell was dismissed. But the instinct was forgotten. And exactly then everybody took to the bottle. Only Lenin didn’t drink.

Poetic Album “Along the Silence”

The poems by Alexander Korotko were recited for the first time for wide audience in 2002 by Sergey Yursky, People’s Artist of Russia, thanks to the Moscow company “Knigochiy” headed by Olga Kuleshova, which started planning to release an album of poems by Alexander Korotko “Along the Silence” after having released audio albums of Silver age poems, recited by famous artists. That’s what the poet said about the project and performance by Sergey Yursky “He treated this work as a very mature person and he has done two things. It is amazing – the simplicity of recital and unbelievable internal concentration. Yursky has met all the challenges, he managed to express the main feature of my poetry – being distant”. And here is what Yursky said “Our cooperation with Alexander started long ago. Together with my close friends we recorded discs with poems by Yesenin, Mayakovsky, Pasternak, Mandelstam, the next poet to have appeared in our list was Korotko. This is when I got acquainted with his poetry for the first time”. Sergey Yurski recorded some poems by Alexander Korotko. They were picked by the actor himself, he also defined their order. The poems are accompanied by piano music by Sergey Rakhmaninov played by Dmitry Ratser. 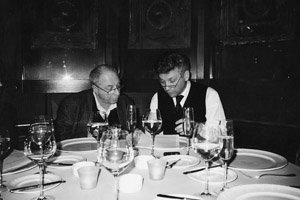 *** For Sergey Yurskiy Having slapped tiredness, gentle, aching soul, on the crowned head, You come like a pauper patrician, like an enthusiastic critic, on the stage,

and begin a life of hypocrite, frightened by the time, by the bell ringing of minutes, predicting shameless ovations, unnecessary neither for the audience nor for you.

The poem “Abraham and Yishaq” recited by the author, recorded in Jerusalem

On April 19, 2008, Saturday, on the first day of Pesach, “Reka”, the Jerusalem radio, broadcast a program by Yossi Tavor “Abraham and Yishaq” from the cycle “Invitation for Reading”. The audience of this Russian-language radio all over the world got acquainted with a new poem by Alexander Korotko “Abraham and Yishaq”, which was recited by the author, commented by Yossi Tavor and accompanied by a masterly selected music. 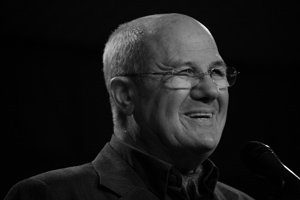 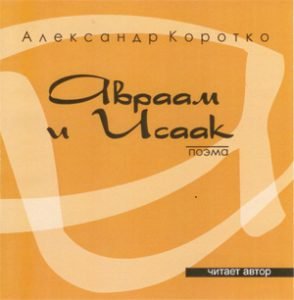 “Spiritual affinity and inherited memory are often the reasons why destinies and feelings of biblical characters are perceived by a creative person as an integral part of his own destiny, his own feelings. This is how Alexander Korotko, a Jew, a Ukranian poet and an author of the poem “Abraham and Yishaq”, perceived the story of sacrifice of Yishaq. Сreation of this poem was long and complicated. Alexander Korotko narrates the story of sacrifice of Yishaq through the viewpoint of a person of our century, who is familiar with a centuries-long vagrancy and sufferings of our nation, which however, despite all the tragedies, still believes in its higher mission to be committed to the Creator’s covenants”. Yossi Tavor   Poems of the Crimean cycle, recited by the author Many of Alexander Korotko’s poems are devoted to Crimea; many of the poet’s biographyсal events are connected with the peninsular. In 2002, the poem “Bakhchisaray” was published; a lot of poems were published in books “The Tacit Songs” and “I Never Lived on Earth”.

In 2006, a culturological project started, involving authors’ recitation of poems about Crimea, most energetic and mystic places of this ancient land, and video materials. It resulted in creating five short films – “Bakhchisaray”, “The Karaim Cemetery”, “Chokrak”, “The White Rock”, “Tarkhankut”, which were uploaded to YouTube. The recitations of poems by the authors were recorded in Kiev, background music was offered by the author himself. Creation of these poems was inspired by trips of Alexander Korotko to the Crimea. 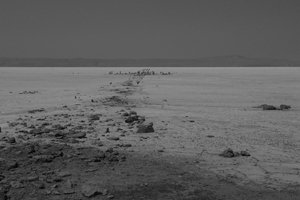 CHOKRAK Let the Sun get its burning badge out of the eye-socket of heaven and put it slightly to the side of the Crimean mountains. So, Chokrak begins in such a way, an alien lake, a desert, the triumph of the devastation, a tortured essence of salty lips, not talking about the thirst of dumb memory. A boundless tantrum of love in a horizontal plane of a bloodless map of vegetating, where all the greatness is from fear, from inability to come back and feel yourself like a baby, breast-fed with emptiness. 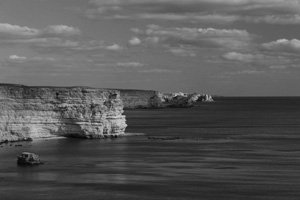 TARKHANKUT Precipice of heavenly heights, the sea in boundless fields, pitted with winds stacks of sheep rocks, interbreeding of both happiness and sorrow was found in this province. With a salty grey truth confusion and horror of night pupils breaks into a square, clamped into the gorges of being, and a peace of inspiration tighten the belt of fear, and an impress of black autumn invades as a demented Bach, and it’s possible only to keep silence and to be a solitary, a monk and feel yourself as a crooked mote, but better as a dust. 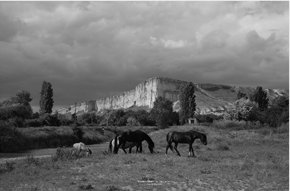 their spiritual flesh as a rock, and space

ran amok with relocation, with invasion into

the indomitable love to misunderstanding of the act.

Let’s drive up, let’s come around, you see, how

the Sun is burning down in the sunset brew of minutes,

and at this hour take your time to understandnot an essence of phenomena,

but a worry, a confusion of an awakened soul.

Such a locality is beyond the power neither for

the world of being nor for the vision, frozen

on the way of the earthy tribulations.

Bring back another pleasure to the eyes and touch

your dream with the reason, abandoned to its fate.