The poem “Bakhchisarai” was written by Alexander Korotko under the impression of staying in Bakhchisarai and strolling about the outskirts. The poet discovered this amazing town in the foothills of the Crimean peninsula in late autumn 2005, though he had been here before. The poem was completed in November 2006 and soon was published as a book. Yuri Gladkiy was asked to illustrate this book with his photographs. Yuri Gladkiy found in his archives great series of Bakhchisarai photographs in winter of the year, when the minarets of the Khan’s palace, tombs of the khans and narrow town streets were covered with snow – it is very unusual for this region.

The author of the poem found evidence of his own feeling of “the other world reality” and detachment. Some of the photos were shot specially for this unique publication, which can be considered to be a poetic model, and a real culturological project.

“Bakhchisaray” is the first in the literature epic literary work about this ancient land.

The offensive sun scared the moon, the forest sank its teeth into
the mountains, the roads turned into drafts. Not like the time
breathed out cruelty, but so. Silence staggered through the streets.
With the back pressed to the darkness rock-Goliaths stood. And
Karaites came to the cemetery to die, to their paradise, kept by
the blessed memory. Little people always have eternity in front
of their eyes. They put suffering and their journey under the head
of nights and fall asleep in the warmth caressed by the trepidation
of candles. It’s indecently to recognize each other here. Having lost
the society of intrusive friends, you belong to yourself, get on the
train and come. Every day life took the philosophy away from
the local people. But this is just an occasion. Look at the walking,
you see, a woman is going, an old man behind her. Neither sadness
nor melancholy, but an anticipation of anxiety, their only one luxury,
they are carrying with obstinacy and dignity, like a swipe on the
shoulders, and in this kingdom of ignorance a unique spirit is living.
To forget yourself – a prime cause, the beginning of relocation.
Tourists are here uninvited guests, they make a din, like seagulls on
the pier during the year of famine, but is the sea decreasing? Here
the distance – a thing in itself, an otherworldly reality, and if the light
is on in the window, don’t believe. To live according to the town’s
truth is viciously and senselessly, all punctuation marks can’t find
a place for themselves here, and only ellipsis gains such a strength,
that if there were no wind, who knows where it would lead. Summer
brings all the troubles and woes. Humility is calling for separation. Fall
comes. And the main sadness wants a revenge. A pampered brush
leads the guest with a hand, and the heart grows cold in the morning,
and I want to drop everything and leave. To endure is not for me. 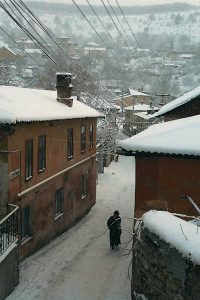 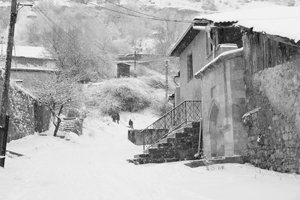 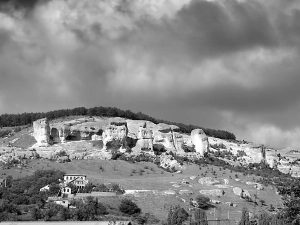 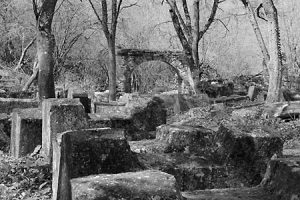 A cake of a layered memory, a hyperbolic word. The sky has its own
sacred duty – the basis of the dust, and wherever you are, you
are just a guest, and don’t make plans ahead, while the cemetery
joy is drinking drop by drop the juice of trees. Unprotected
headstones keep silence of the autumn, and it’s only the similarity of soul. Sleepless gardens hang, and oaks ring in shackles.
What can be easier than a hope, just a juniper grove
in the shades of barbaric fate. Along the smoldering silence, along the alley, no, along the long trail, you climb for a short time to the gates of
heaven, and, stepping on the laid-back pavement, you consider your life
as a dream, without realizing it, in this darkness you come to life,
and give the key to eternity to all who have sinned
on the Earth. 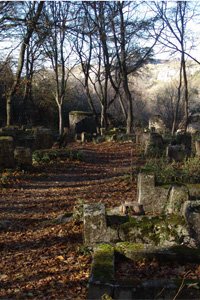 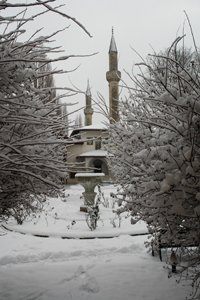 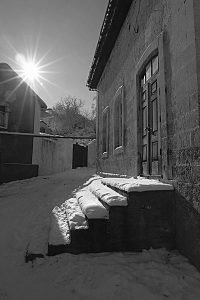 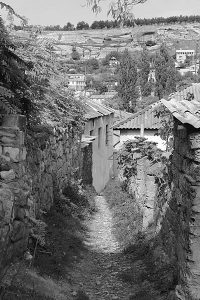 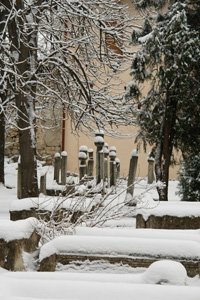 Portraits of Alexander Korotko by Yuri Gladkiy are included in several poetry books. They are also in newspaper and magazine publications (interviews, announcements of published books). Three photo portraits are included into the design of book covers of the following books:  “From A to Yafigizms”, “Silent Song” and “I didn’t live on the Earth”. They are also used for the internal design of half-titles of the above-mentioned editions. Reportage photographs of  Yury Gladkiy are posted on the pages of this website. Landscape photographs appear in a little video “Winter in Yalta” (Alexander Korotko is reading a short poem of the same title) and the song “Lost Paradise” (lyrics by Alexander Korotko, music and performance by Inna Pushkar). Both videos are posted on Youtube.

In 2008 Alexander Korotko wrote a short poem about the magic of photography. He treats this type of art that is at a distance from others with unconditional respect. The poem is about all the photographers who are devoted to their art selflessly in the highest sense of the word and, as Yuri Gladkiy, work honestly and diligently.

Frozen life at the school desk of reason
in the plastic box of your childhood hides black
and white pencils drawing from memory of losses
the pictures of soul. There are a lot of them,
they penetrate into the lens of consciousness, scream, bitten by the delight of what is happening,
and no one is aware that these prints of life
on the inanimate background of the lost illusions
is nothing like a panegyric, sent by the artist
poste restante to himself. Deafness of speechless moments is bristling.
Why to be liked by others in the childless air of imagination. Silk – and the guillotine of picture
decapitated what is happening, and now you are resting on the negative, pressed by the time
and nonexistence. 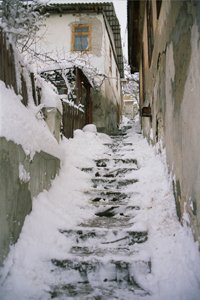 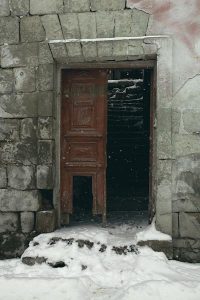 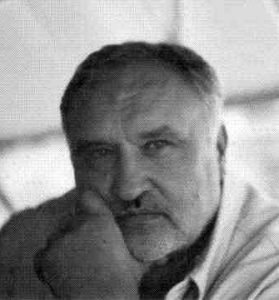 Yuri Gladkiy – photographer, member European and Russian Unions of Photojournalists. He was born in 1957. He graduated from college got the qualification of a surgeon. He got his second degree in America, in New York University of Economics (majored in Production Management). He has been to many states of North America and European countries.  He has visited Asia and Africa, Cuba.

The portfolio Yuri Gladkiy includes portraits, reportage and genre works, landscapes and still life. His photographs are published in Kyiv newspaper “Boulevard” and “Facts”, Crimean magazines “M Club” and “Caprice”, Russian magazines «GQ», «Vogue», «Glamour». In 2009, Yuri Gladkiy took the third prize in the prestigious photo contest of professional photographers of Europe, organized by «Playboy» magazine. Over the years, he held his own exhibitions. His works are in many private collections.